My partner and I went on an African safari in Tanzania in 2010.  We started out in the northern part of the country in the city of Arusha, considered the gateway to safari territory. It is strategically located near Mt. Kilimanjaro and the Serengeti, a world heritage site that was recently proclaimed a seventh wonder of the world.

The Serengeti, which means endless plain, is famous for its annual migration of millions of wildebeests and hundreds of thousands of zebras and Thomson’s gazelles. Referred to as The Great Migration, these animals go north leaving Tanzania for the Kenyan border and an area known as the Maasai Mara. Dictated by rainfall and food sources, the animals migrate north in the summer and return to Tanzania in the fall in time for wildebeests’ calving season in February. The African Baobab trees are alive and used by animals for food and water.

While the animals were not migrating during our visit, game viewing in the Serengeti was none the less spectacular. We saw herds of buffalo as well as elephants, giraffes and the many different African antelopes including eland, topi, kongoni, impala and Grant’s gazelle. In addition to mammals, the Serengeti is famous for its reptiles, birds and plant life. Before leaving Arusha to visit four national parks,our guides cautioned us we were entering the animals’ territory. All animals are wild. Being careful means never getting out of the vehicle on game drives. The tops of the vehicles, however, were open for better viewing during the drives.

One may be inclined to think of lions when considering the most vicious animals, but on safaris, guides know it’s elephants that are the most dangerous.  A gun is attached to the back of vehicles in case an elephant goes rogue. Thus, when an elephant walks in front of a vehicle, it’s the vehicle that stops and waits for the elephant to pass. And about those lions, the ones we saw were more interested in their morning nap.  We drove within 50 feet of male lions without our guides being concerned or the lions showing any interest. Animals peacefully co-exist as they graze

When we visited Tarangire National Park on our first day out, we saw elephants, giraffes, zebras, wildebeest and antelope grazing — some side by each. My initial impression was one of amazement. Seeing these animals peacefully grazing was one of the most civilized scenes I have ever witnessed. This same scene was duplicated time and again throughout our safari.

Our guide told us only hyenas kill for pleasure. Other animals — with the exception of humans – kill only when hungry or seeking food for their young.  Most kills take place at night.  We did not see or hear a kill which was fine with me. While staying at the Serengeti tent camp, our drives started early in the morning – the best time to see animals. After the drive, we returned for a delicious brunch and a few hours rest before heading out for a late afternoon drive. While on game drives, when an unusual animal was spotted the guides from various tours contacted one another. Then many vehicles converged on the same area. This happened when we spotted three cougars. It’s unusual to see one cougar let alone three.  Another time we spotted a bat-eared fox and our guide got excited. He said it is one of the few times he’s ever seen one. Several safari experiences were especially significant. One was at a watering hole when zebra stallions used barking and yipping sounds to organize a large herd of zebras. With their loud barking sounds, these stallions limited the number of zebras going to and from the water.  As we were watching the zebras, a herd of wildebeests came into view slowly walking in a long line toward the same watering hole.  Several stallions galloped toward the wildebeests and stopped them until their herd had finished drinking and enjoying their time in the water. Come along baby, time to join the family

Using her trunk and large front legs, the mother tried to gently nudge her baby out of the stream. One of the young elephants–we named the big sister–went back to help, but it still took another ten minutes to convince the baby to leave. We all quietly cheered as the baby walked safely out of the water under its mother’s belly. The third incident occurred at the end of a drive as we were heading back to camp.  “Stop,” a fellow traveler stage whispered, “there is a leopard in the tree over there.” And indeed, there was — a rare sighting.  About a fourth of a mile away, the leopard was lying on a large branch high up in a tree.  As we watched, the leopard casually lifted its head, yawned and changed position.  Not much for the leopard, but it was heart stopping for us.

Before I close my series on our African safari, I will share our impression of the interesting and diverse people we met, saw and heard about on our trip. Of our three guides, one was Christian, one Muslim and the other tribal, representing Tanzania’s three major religions. While English and Swahili are Tanzania’s two recognized languages, it is home to 120 different tribes and each has its own language and customs. In my concluding blog on our safari, I will discuss the people we met on our trip to Tanzania. 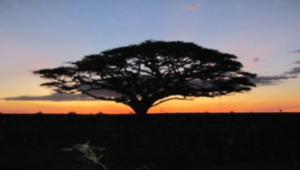 The Takeaway: Going to Tanzania on an African safari was a life changing experience for many reasons.  I had the opportunity to see animals, large and small, in the wild as they grazed, splashed, ambled, lazed, slept and watched us as we watched them. It was one of the most exciting and awe-inspiring experiences I have ever had. What travel experiences stand out in your life?  Share and let’s learn from each other. Include your name and email address or phone number so I may contact you if I have a question. I will not publish your name. Contact me at [email protected]