Shortly after we came back from a safari in Africa, a wise person told me, “You go for the animals, you go back for the people.” In 2010, we went to Tanzania on a 10-day safari and it was our first time on the African continent. Prior to our trip, we knew little about the country.

We learned Tanzania has more than 120 different tribes, each with its own customs, language and religion. In the late 1700s, the Zanzibar archipelago, off Tanzania’s eastern coast, came under the control of the Sultanate of Oman and brought with them their Islamic beliefs. Europeans colonized the mainland in the late 1800s and brought Christianity with them. Today, Tanzania’s population is one third tribal, one third Christian and one third Muslim. Tanzania and the archipelago of Zanzibar gained full independence in the mid-1990s. Tanzanian leaders are proud their country earned its independence peacefully, unlike so many other countries in Africa.

With a Gross Domestic Product below $2000 per capita, however, Tanzania is one of the poorest countries in Africa. Nearly half the country’s GDP is based on agriculture and industry with tourism contributing another ten percent.

Life in Tanzania is difficult and physically challenging. Most homes, especially rural, do not have running water or electricity. The land is subject to drought or conversely, epic flooding. At a young age, children start helping with chores such as walking long distances to collect water in large buckets. In a previous blog, I discussed the amazing people with disabilities who reside at Shanga, a community near Arusha built on a coffee plantation.  With life so difficult in Tanzania, it helps explain why people who are unable to carry their share have been set aside in Tanzanian society. With high infant mortality rates, babies traditionally are not even given a name until they are three months of age. Fortunately, there is a place like Shanga for people with disabilities to live and contribute to the best of their ability.

During our visit to Tanzania, we found people were kind, caring and accepting of others. Of our three guides, one was Christian, one Muslim and the other tribal.  They worked together cooperatively and treated us, the tourists in their charge, with kindness and good humor, even though some of us were a bit trying at times.

People outside Tanzania know little about the 120 different tribes who live in this African country. Only the Maasai tribe – small in number by tribal standards – stand out. The Maasai continue with their semi-nomadic lifestyle, distinctive customs and brightly-colored dress. The Maasai men are able to freely cross the border between Tanzania and Kenya as they take their cattle and goats to find better grazing grounds.

Today, many Maasai live in more permanent villages as shown in the photo taken at a Maasai village. The women, many married to the same man, especially the tribal chief, are responsible for child care and cooking as well as building and maintaining mud-walled, thatch-roofed huts. Young men and boys take care of the cattle and goat herds, which are most highly valued by the tribe.

In the past, Maasai people subsisted on only what the herd provided. Today many Maasai raise crops, also the responsibility of the women. While most of the Maasai’s culture and customs continue, the killing of a lion as a rite of passage for young men has been outlawed by the governments of both Tanzania and Kenya. Children learn how to draw and paint at village art school.

Another interesting experience we had was in a small village we visited near the Ngorongoro Conservation Area. We stopped by a small outdoor art school run by a 36-year-old bachelor. In addition to teaching children how to draw and paint, he provided the children with lunch. The village children have a safe place to go during the day and it helps them learn a trade that helps their families. The school is on the teacher’s property. In fact, he prefers to sleep in the old thatch-roofed hut where he was born, rather than the brick house he built for his mother. Justin Basso is an elementary school principal in Tanzania

Another remarkable man we met is Justin Basso, an elementary school principal who is a kind, but strict taskmaster.  His school has no electricity or running water, only a water well. The children arrive at school at 7:30 a.m. Their first job is to clean the school’s classrooms and then take care of the school’s garden. 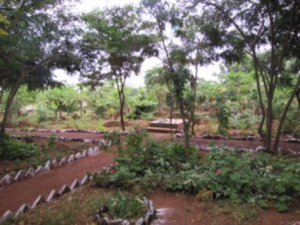 Elementary school’s garden is beautifully cared for by the students.

With Mr. Basso’s oversight, the children built and tend the garden with its rock-edged paths.  The children sell the garden’s produce at a local market. This money helps buy school supplies as well as teaching the children important math and life skills.

The Takeaway: Going to Tanzania on an African safari was a life changing experience, especially for the people we met while we were there. How have people you met on your travels, affected your life?  Share and let’s learn from each other. Include your name and email address or phone number so I may contact you if I have a question. I will not publish your name. Contact me at [email protected]